From darkness to hope for tomorrow

November 2021 was a very dark time for Rob Rau, a 65 year old living in the Port Huron area. As winter approached, Rob was faced with being homeless. To make matters worse, his personal finances were in disarray due to years of theft from his bank account. If that wasn’t enough, his health was deteriorating. Rob was now using a walker and had taken several serious falls. Things needed to change quickly!

Rob’s life was in the balance. Living on Disability and a modest amount of Social Security, he needed the help of others to get him out of this very dark place. Your donation to PVM Foundation saved Rob’s life- yes it really did! Learn how your donation offered Rob a new home at The Village of Lake Huron Woods and significantly improved his health with the caring staff at Sunrise PACE.

Your donation gave him hope during one of the most difficult times in his life.

Rob’s overall health had an effect on his life, which ultimately led him to the brink of homelessness. Before he was 30 years old, Rob had two heart attacks and a very serious knee injury.

He had physically demanding occupations for all of 30+ years in the workforce. As he approached the age of 60, his bad knee had gotten significantly worse. “Bone on bone, I basically could not walk without serious pain.”

Rob’s life changed from being fast paced to being very sedentary. “I could barely get around. I had to rely on others to do almost everything. I felt like such a burden,” states Rob with despair in his eyes.

His physical health was continuing to decline. He also had several severe falls. One fall was so violent that his glasses became lodged in his forehead! Furthermore, he could not get to his doctor appointments due to lack of transportation. At that point, Rob realized things needed to change.

With limited family support, he went searching for options. Rob learned of Sunrise PACE adjacent to the campus of The Village of Lake Huron Woods in Fort Gratiot, MI (just north of Port Huron). “Sunrise PACE was perfect, they offered transportation and all the care I needed.” 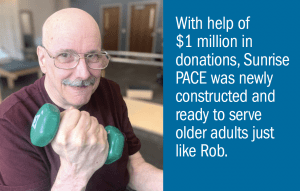 With the help of $1 million in donations, Sunrise PACE was newly constructed and ready to serve older adults just like Rob.

However, Rob’s transition to receiving care at Sunrise PACE and moving into an apartment at The Village of Lake Huron Woods was anything but smooth. During a financial review, Rob was made aware of years of theft from his bank account without his knowledge. “The shock was traumatic.“

“For the first time in a long time, I got a clear picture of what I had in my bank account. I did not have very much,” states Rob shaking his head.

After his trip to the bank, he found all of his belonging on the front lawn. “I was kicked out and had nowhere to go. Sunrise PACE was immediately there to help.”

Sunrise PACE is a program where older adults receive all the care they need in one location. Everything from primary medical care, nursing, rehabilitation therapies, dental, vision and so much more. PACE stands for Programs for All Inclusive Care for the Elderly. Because of $1M in donations, Sunrise PACE had enough extra funding to build transitional housing, which provides a temporary home for those needing care. This is not the norm for other PACE Centers around the state. Way to go donors!

Rob moved in right away at Sunrise PACE transitional housing. A few weeks later, Rob moved into his new apartment home at The Village of Lake Huron Woods as a resident, just in time for the holidays. With Sunrise PACE right next to The Village of Lake Huron Woods it was so convenient for Rob to get all the care and rehabilitation he needed on a daily basis.

The Village of Lake Huron Woods offers Rob a home full of opportunities to meet new friends and build a new life. “I am starting to get know my neighbors and enjoy each day. Thank you to everyone who helped me get here.”

Luckily, there was housing, care, and hope for Rob. Affordable housing is in such demand. Typically two year waiting lists are the norm. Rob did not have two years to wait. He needed housing immediately to avoid being homeless.

Thank you for being there for Rob. Please continue to donate to help the next older adult, just like Rob, facing significant challenges.