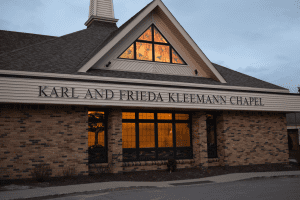 From that day on the idea of a chapel really took hold. The residents rallied around it. With the support and encouragement of their fellow residents Waneta and Mary presented the chapel idea to the Village of East Harbor Board. 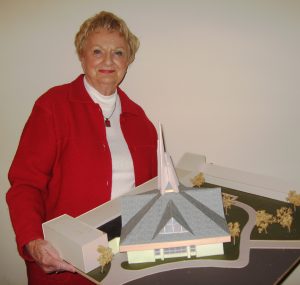 Waneta Hawes, resident and chair of the steering committee

Good news! The board was very supportive of a chapel. However, just like the Patterson Chapel at The Village of Redford money needed to be raised. No funds, no chapel.

The PVM Foundation was included to work with Waneta and Mary to raise $1.6M. Only a few months after seeing the Patterson Chapel at The Village of Redford, they were embarking on a major fundraising campaign.

A group of 10 residents, and few others from the community, formed the Chapel Steering Committee. The committee met the first Friday of each of month.

Waneta took the reigns as chair and was the face of the fundraising campaign (she was everywhere, spreading the good word!). Mary focused on the design of the chapel and worked diligently with PVM to construct a chapel to fit the needs of older adults. 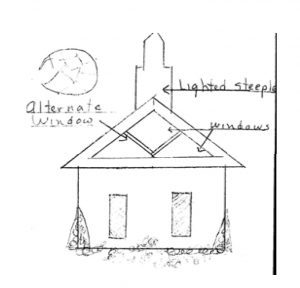 Fundraising was slow at the start. However, once the drawings of the chapel were completed, things really gained momentum. Current and former residents, family members, board members and others gave and gave again.

Like in all fundraising campaigns, every gift matters, BIG TIME. It took 400 or so donors to build the chapel. All gifts made a difference, but three donations in particular made the chapel a reality, not just a vision.

Betty Heaton, Andy Lonyo and Gene Kleemann made leadership gifts. Each one gave for slightly different reasons, but all were galvanized with the notion of having a beautiful place to worship for the residents of The Village of East Harbor.

Gene Kleemann’s generosity prompted the naming of the chapel, The Kleemann Chapel.

“In their memory as a loving couple and great parents, this chapel is dedicated with the hope that many will utilize it for their peace of mind and enhancement of their faith whatever it may be.”

A little about Gene. He was born in Germany during war time. His family fled to Michigan with only 2-cents to their name. They settled in Detroit. Both his parents worked hard and provided Gene with a great life. Prior to making his naming gift, Gene joined the Chapel Steering Committee. He was considering moving into East Harbor at the time. Reflecting on a way to honor his parents, and seeing firsthand what the chapel meant to the residents, he made the decision to contribute to name it. Forever to be called the Karl & Frieda Kleemann Chapel – aka The Kleemann Chapel. 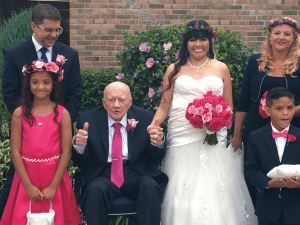 Coincidentally, Gene was married in the same chapel that bears his name. At 90 years young he was married for the first time. It was a wonderful celebration.

Regretfully Gene passed in December of 2019, and his funeral was held in the Kleemann Chapel.

With Betty, Andy, Gene and many other donations the $1.6M fundraising goal was met 6 months ahead of schedule. The money was raised nearly three years to the day that Waneta and Mary hashed out their plan on the way back from The Village of Redford.

The Kleemann Chapel represents the results of power of vision, hard work, generosity and passion. The chapel would not be here today without you the donor. Your gifts are contributing to the health and happiness of countless residents. Come visit The Village of East Harbor on Christmas Eve or any Sunday and you will understand the importance of The Kleemann Chapel.

Interior of the Kleemann Chapel

Again, thank you for your contribution. To the next 10 years and beyond!!

From the first shovel in the ground – to the last piece of stained glass – take a look at the construction photos from the building of the Kleemann Chapel below.